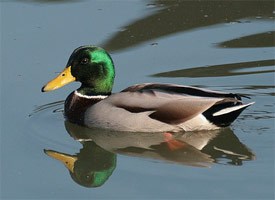 What if the mob were run by an empire of ducks? More to the point, mallards. If we awoke tomorrow to this new reality how would that change the face of the mob industry? Interestingly, no group of ducks, or any fowl, as of this writing, has ever come together to successfully form a shell corporation, such as a cement company, that is actually a front for fencing and other mob-like activities. So this is surely a challenge that should not be taken lightly. Although the mob is essentially by definition illegal, a fair amount of business and legal knowledge is required to affect the appearance of an above the board commercial operation. Mallards are not known as a particularly scholarly animal, so really only the most fiercely intelligent among them would be able to complete the schooling necessary to gain that knowledge. The best they could probably hope for is to truly rally around their brightest one or two, scrape up enough funds to allow them to take a few night classes at a local community college, and hope that the always evolving tax code and regulatory burdens would not be too great to overwhelm the newly enlightened mallards. If the intellectual burden was too much, alcoholism or some other addiction would surely surface within months.


Next to consider is the mallard’s lack of opposable digits. The problem would assert itself in a number of areas: signing important documents, holding a microphone at a karaoke party, or passing the time by twiddling your thumbs while you wait to confirm a car bomb goes off are some that immediately come to mind. Where it would most acutely show up is in the fact that the mallard would find it very hard to wield any type of weapon. It varies by region, but mobsters tend to need to employ the use of the occasional Tommy gun or greased rubber mallet--the mallard has a lot of ground to make up in this tactical arena. Butterfly knives are of course also a weapon of choice, and while the mallard would appreciate the creature reference, trying to operate such a contraption would surely be more than a nightmare for the mallard.


Another glaring obstacle is that mallards, whether rightly or wrongly, tend to be known for their nobility. There is a regality that they either carry innately, or at least project well enough so as to fool their peer species, so infiltrating an organization as dubious as the mob is certainly not a logical conclusion for the mallard, and has a sizable potential to land with a thud. 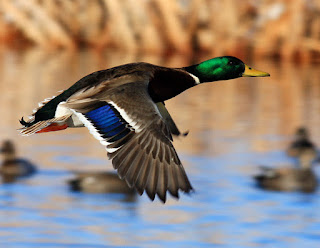 But getting back to the mallard’s inability to effectively wield a weapon: surely workarounds are possible. The animal kingdom, and all its inhabitants, are endlessly resourceful, but it would seem that there are just some obstacles that are too great to overcome. Even if the mallard could rig up some type of lever and pulley system so that it, and maybe a few of its cohorts, were able to pull the trigger on a Tommy gun, their height is an obvious impediment to the whole operation. When a human shoots a gun it is easy and natural to hold it around chest height, aiming at chest height, to do the necessary damage. The mallard’s natural resting height, however, will have them aim directly at their adversaries ankles, or thereabouts. This would have the effect of achieving some level of menace, but the target will most likely be able to do some fast and not overly complicated footwork to evade the rapid fire assault. It is also fairly simple for a human, if properly squared up, to just pull their dominant leg back, and with a firm plant foot, just punt a mallard a good 15 to 20 yards, of course adjusting that estimate accordingly for prevailing winds and barometric pressure. The mallard will have to be ready for this type of onslaught if he really intends to do a proper ambush-style mob hit. The discerning mallard will probably come up with some type of portable, wrought iron turret it can ensconce itself in to evade angry, vigorous punt attempts, but still be able to poke the muzzle of his machine gun out of the slat, to inflict maximal damage.


All of this is mere child's play in comparison to what would surely be the most challenging obstacle to the mallard’s ability to fully assume the role of mobster: cement shoes. Probably just the mention of the clumsy but devastatingly effective practice would drive any team of mallards to a bout of severe heartburn. Many challenges have been overcome by the mallard, but one would think that the cement shoes would be the great third rail, as it were, of mallard-cum-mobster operations. The heart of the problem lies in the fact that, assuming they were able to come up with some system to make, mix and pour the shoes, the process of picking the victim up, adding to the already large, probably 200 plus pound frame of the quaking victim, are these monstrously heavy shoes. The strongest mallard on record was only able to dead-lift 58 pounds (and even that event is somewhat contested), so a quick estimate indicates that about 30 mallards would be the bare minimum needed to hoist a stool pigeon the few feet needed to get to the end of the dock to drop the snitch to his watery finale. Now this is where things get complicated: mallards are notorious for their lack of teamwork. Nature has bred them to stand out amongst their peers. Their vibrant colors only help to reinforce their desire to set themselves apart, prove their gusto and prowess, and thwart even their own brother if it means winning the affections of the female. Even when not in a mating situation, you can well imagine the posturing and showboating that goes on among a skein of male mallards. Even if 30 or so mallards could be arranged around the blubbering goon, the urge would be too great for the individual mallard to not put forth the requisite effort, so that he could blame his fellow mafiosos for their lack of upper-wing strength. 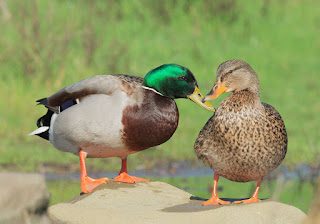 In the end we find that, although a tantalizing thought experiment, it does not seem likely there will be a shift in the power dynamics of the mob from man to mallard. Although, this has only been a very brief and quite unexamined look at the possibility, so one should not be too hasty in blithely concluding that this will never happen. The possibility certainly warrants more research, but grants would be necessary, and the current culture in academia is surprisingly anti-mallard, for reasons that are not clear upon first glance.
Posted by JD at 6:39 PM

Email ThisBlogThis!Share to TwitterShare to FacebookShare to Pinterest
Labels: ducks, thought experiment, Thoughts, What if