He Caught The Ball

I was telling Jess tonight that this Seahawks win over Green Bay has too many similarities with conversations about politics and religion. It feels like people have made the decision about what they believe, and there is no budging now, evidence be damned.

My reaction on Monday night: It definitely looks like we got away with something. I'd like to believe that the officials saw something the rest of us didn't, but it sure doesn't look that way.

Tuesday: There is at last a chance, a thin thread of possibility, that they got the call right. But even if they did, what's the point, nobody else in the country would believe it.

Tonight: They got the call right, damnit. And I don't care if you think that makes me an idiot--look at the evidence, if you're not willing to consider they might have gotten it right then YOU'RE the close-minded one. 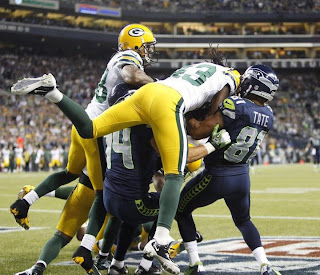 The view we got on MNF was from the South, if you will, but this is from the North. In the other view you see Jennings clearly receive the ball, and it looks like Tate just sort of shoves his right arm up there, which would seem, in no way, to imply that he has simultaneous possession. And as I watched the replay over and over again I wished and wished I could see what his left arm was doing. And there you have it. We know his right arm was on the ball--but now we see his LEFT arm, also on the ball. Do you understand. Two hands on the ball, two feet on the ground--Jennings still up in the air.

There is no doubt that Jennings elevated above Tate and received the ball first. BUT THAT'S NOT WHAT A LEGAL CATCH IS IN THE NFL. A catch is only a catch if you receive the ball and control it all the way to the ground. That means that, until Jennings is on the ground with full control of the football, Tate has the opportunity and duty to do everything he can to get the ball. So before Jennings can get his feet on the ground, Tate has already gotten both of his hands on the ball, and they are engaged in a struggle.

With all of the right angles, considered as a whole, it seems pretty solid to me.
Posted by JD at 12:17 AM