On Moneyball & Wasting A Life

Like seven million other people in the world, I recently saw the movie Moneyball. Everyone is raving about it, and I hate to be the grand balloon popper, but I was slightly underwhelmed. I'd say it was a good movie, but I'd qualify the hell out of that statement, and continually mutter under my breath that it has problems and is not without its flaws.

(Tangent: I fear being the dissenting voice on a commonly enjoyed movie. It's like it bums people out, and I feel resentment seeping my way as I articulate my problems. But I'm learning to manage it, I was much less blatant with Moneyball, so I don't think I pissed anyone off.) But yes, there was a lot to like about it. I was fascinated by the tension between "doing it the way we've always done it" and turning baseball into a science--demystifying, denuding and de-romanticizing the game. I thought they represented both sides of the argument well. Every time some old fart would tell Pitt he had no idea what he was doing and there were too many intangibles he wasn't accounting for, I was like "well, they're right. That makes sense." But I was frustrated because, though I am a casual baseball fan, I'm sorry to say that I've never read Moneyball, nor have I boned up on what goes into it, what the opposing arguments are, etc. And that bothered me. I was uncomfortable with not being able to take a side due to lack of knowledge.

So I started to think about doing what I've done for the last ten years when I get this feeling: Read! I wasn't sure if I would read Moneyball, as I do have about 100 books or so on my waiting list, but I was interested to go and find some blogs that offer critiques of the Moneyball approach.

And then Sanity stepped forward and said "stop it!" Yes, I could read up on Moneyball and anti-Moneyball and develop a formed and nuanced opinion on the whole thing--and it would be a complete waste of my time. It would be interesting, and I would enjoy myself, but I would be wasting a neat little slice of my limited time. Look, if I was going to be the next Ken Jennings then it would be easy to justify pursuing every rabbit trail of useless knowledge.

But Ken Jennings I ain't. It's taken me a long time to get here--I have fantasized about a long-standing Jeopardy run for several years now. But the bloom is off the rose. I'm not reading up on mid eval dynasties and obscure lakes and rivers. I haven't purchased a Complete Works of Bill Shakespeare.

It's a fine line I'm walking because in a lot of ways there is nothing wrong with pursuing "useless" knowledge. If you do you're more fun at parties and you'll be a better conversationalist. But I do something weird with it. It's as if I'm hiding behind the pursuit so I don't have to pursue what I'm supposed to be doing.
Posted by JD at 12:01 PM No comments: Links to this post

What would I do now,
now that I've lived a little down this road?
The childish plays at depth and meaning have lessened.
The winding path of time has straightened.

What would I do now,
now that I know I can't earn it,
I can't force it, I can't, by dint of effort,
achieve whatever I want, as if I'm in a vacuum,
as if I am a self-sustaining force unto myself.

What would I do now,
now that the paint's chipping,
the sheen is gone;
the virginal assumptions decimated.

What I would do now,
now that I have to acknowledge the limits,
defer to the chaos, whither in the insuperable strength--
befriend the fear, bow my head,
and edge forward on my knees.
Posted by JD at 8:54 AM No comments: Links to this post 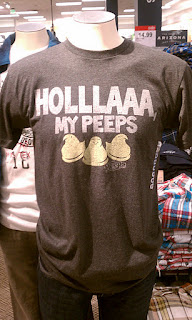 Apparently t-shirt makers have discovered they can put absolutely ANYTHING on a shirt and it will sell.

Posted by JD at 6:02 PM No comments: Links to this post

The Last Word on the Suburbs

Or, really, for any place that anyone chooses to live.


Like every other good American, Jess and I started the wonderful saga of The Wonder Years tonight, because Netflix began streaming it this week.


At the end of the pilot episode is the following quote, and it articulates the dim thought that always occurs to me whenever someone bags on the place I've spent my childhood and, well, my whole life. They nailed it. How could you not pick up this show after this episode?:


"...Whenever some blowhard starts talking about the anonymity of the suburbs or the mindlessness of the TV generation, because we know that inside each one of those identical boxes, with its Dodge parked out front and its white bread on the table and its TV set glowing blue in the falling dusk, there were people with stories, there were families bound together in the pain and the struggle of love, there where moments that made us cry with laughter, and there were moments, like that one, of sorrow and wonder."
Posted by JD at 12:41 AM 1 comment: Links to this post

It's Not Going To Stop

~Aimee Mann
Posted by JD at 11:31 AM No comments: Links to this post

Today this wonderful Woody Allen quote was an answer on Jeopardy:


"It's not that I'm afraid to die, I just don't want to be there when it happens."

But I didn't happen to catch the punctuation they used, so I started wondering how exactly it was written.

Apparently the rest of the world is confused as well, here are three of the top four hits I got when I Googled "It's not that I'm afraid to die":


"It's not that I'm afraid to die, I just don't want to be there when it happens."

"It's not that I'm afraid to die; I just don't want to be there when it happens."

"It's not that I'm afraid to die. I just don't want to be there when it happens."

So Googling didn't help, but it did give me the source of the quote. It turns out I have the book that it's from, which is "Without Feathers." I used to own the book as a single volume, but I got rid of it when I received for Christmas one year "The Complete Prose of Woody Allen" wherein all of his three books (up until that point) were in one handy volume.


So I began looking for the story the quote was contained in...only to find...that the story (in this case, a play)...wasn't in the book. Now, the laws of physics, nature and ethics tell you that this shouldn't be the case. If a quote is in a book, then ipso facto it will be in YOUR copy of the book. I went through the table of contents several times secure in my faith that reality was not in fact falling apart at the seams.

After too long of a period of time I despaired and gave up on my quest. I don't remember exactly what I did next, but I think I started Googling something like, "my copy of Without Feathers is missing stories" or something like that. And the answer, infuriating and dumb, was soon made clear:

My book was the complete PROSE of Woody Allen. Therefore any of those unworthy PLAYS were stripped out.

So I reserved a REGULAR copy of the book from the library, had my sister pick it up and bring it to me (why not, she works there?! Sorry, it's just that my wife thinks I'm a bum for making her do that), and I finally got my hands on the quote.

Now: I haven't told you this, but the reason why I was so curious is because I'm obsessed with dissecting language and grammar to figure out what makes things funny. And what makes funny things even funnier? My gut feeling is that going with a comma after the word "die" served to be the best punctuation to help deliver the highest funny. But obviously there are options there. You can break it into two sentences. But that's too much of a break, it doesn't flow enough and therefore subtracts some funny because of the lack of flow. You can go with the semicolon but I personally find that too academic and you end up lost in your head questioning whether or not that was a proper use of a semicolon (which is what you ALWAYS do every time you see a semicolon, at least if my experience holds true for the rest of humanity).

So that's my thought process, but would the master agree with me?

Yes he did. The line is as it should be,

"It's not that I'm afraid to die, I just don't want to be there when it happens." --Woody Allen