You may have noticed I haven't been posting as much lately. There are a couple few reasons for this, and since I can't think of anything else to write about, I'm going to write about what is keeping me from writing (inner critic: "Oh yeah, OH YEAH, this is riveting stuff bro, now you're giving the people what they want, now you're entertaining them—a piece on what you're thinking about writing about what you're not writing and why you're not writing about it—BRILLIANT!" Sorry about that, my inner critic is incredibly sarcastic, so though that seemed encouraging, it was actually biting, rude, and hurtful).

So, Reason #1 for Why I haven't been posting lately, is because Jess and I now have one of these.
One of these is a wonderful reward, a true blessing, and a lot of work. (Yes, all of you experienced parents, much MORE work than we had pre-baby imagined. Yes, yes, keep yucking it up, it's your turn to do such things, after all—it is a right you have earned. But much to your chagrin, he was sleeping through the night by a month—I think I could get used to this bragging about your kids thing). It is quite strange to go from living as a couple to over night adding a third person to the mix who is wholly dependent on you for everything. "I'm going to sit down and relax,"—think again. And the beat goes on...
So, Reason #2 for Why I'm not posting as much. And this one is the really real reason for why I haven't been posting as much. The cruel and unfortunate truth is that not as many funny things have been occurring to me. I don't assume for one moment that what I'm actually doing on We Need the Eggs is serving up quality, actually funny (as in it makes people, inwardly or outwardly, laugh) comedy, but it is, however, what I'm trying to do. At least, that was my original intention when I entered the world of blogging five or so years ago. But lately the funny hasn't been flowing for me. And what's more, lately my mind and thinking has found itself being drawn to more serious matters. I'm frequently drawn to the intersection of culture, politics and religion. I find more and more that that's what I want to be talking about. The problem with this is that it is in direct conflict with the inaugural intention with which I setup my personal megaphone to the masses—I Wanted to Make People Laugh. We need the eggs, which means life and people are crazy, which means life is at its core absurd and funny. Since life is obviously going this way, the way of the funny, I just thought I would ride the coattails of an implacable truth.
But alas. I find myself wanting to belie my essential truth, my founding document, the thing inside me that says, "Above all, funny man, be funny." There are two problems with shifting away from the funny and moving to the serious. The first is that I have a great deal of pride wrapped up in the idea that I am above it all, looking down on the world, not taking it too seriously, and therefore beating it. I like that I don't often get personal, I like that I don't often speak with conviction—there is something about speaking earnestly and with conviction that seriously bothers me (I know this is something broken inside me, I'm only explaining, not justifying). In light of all this psychosis it is personally difficult to pivot away from being distant, biting and critical and move toward the actions of explaining, justifying and championing.
The second problem is that I'm worried it's tacky and amateurish to switch horses mid-flight, as it were, under the same heading and attendant philosophy that has thus far guided We Need the Eggs. Of course the truth is that being occasionally serious is nothing new to this blog, but now I'm going through a possible paradigm shift that means the serious may no longer be the exception to the rule.
As I sit here watching the drool fall from my son's mouth and slowly coat his greater torso area, I think "Screw it—you and everyone else will like it or leave it, there is nothing else in the world but that."
From this point forward all I can tell you is this: You may see more serious stuff being thrown up here, or you may not. I can't imagine dispensing in full with the funny (or as my detractors would say, my lame attempt at the funny), I believe it will always be with me. All that has changed, I think, is that I have given myself the permission, and you the warning, that I am allowed to go with this blog wherever my mind feels like going. If I want to tell you why Christianity, properly understood, is the ultimate reality, is all there is and ever will be, then damnit I'm going to do it. If I want to tell you that though I'm a conservative I see Republicans doing little to nothing that is constructive or helpful, then YOU'RE GOING TO READ IT AND LIKE IT.
Well, catharsis achieved.
Which means, post over.
Posted by JD at 4:28 PM No comments: Links to this post

How Stupid Are We? 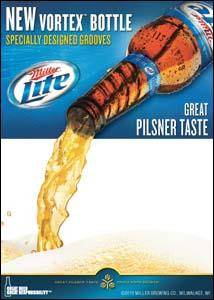 I'm not being cute. Seriously, how stupid are we? What you have to remember about these types of things is that Miller didn't just decided to take a stab in the dark. They tested this concept with people and enough of them told Miller that it was a good idea. Enough of them said, "Yes, if you make the beer swirl into my mouth I will be more likely to buy your product."
Holy hell. It's horrifying, isn't it? I mean, ever lite beer from every brand already tastes basically the same anyway, but you and I live in a world where making crappy beer swirl slightly out of a bottle will earn a company millions and millions of extra dollars.
And it's our fault. We can't laugh at Miller, they're only giving us what we're demanding.
Here in America, We Want Beer That Swirls.
Posted by JD at 1:25 PM 1 comment: Links to this post

Cleaning out my draft folder in my email account. I have 104 of them. Because of the highly accesible nature of email I often use it as a place to store Thoughts to Myself, story ideas, and of course, like all of us, searing tirades to friends, family and coworkers that, thankfully, never saw the click of the send button.
As I've never made any bones about who I am and what you mean to me, I thought I would put some of these intimate key strokes on display for the bored reader. Is this cheap, uninteresting and dull? Perhaps—but that's never stopped me before.
Draft dated 5/21/2006, entitled "One Crappy Poem":

I am a mess of broken keys.

nothing so valuable as a decent

measure of respect from friends/family.

Draft dated 3/30/2006:
How to get rid of your girlfriend
1) just be yourself
2) treat her like one of the guys, and get mad at her whenever she doesn't act like one.
Draft dated 1/1/2008:
You know how every once in awhile someone will come along and say, "You know, life was really great in the 50's, we need to get back to that"? And then invariably someone will come along and say, "Oh yeah, it was really great for black people back then," only you can tell they don't really mean it and they're being sarcastic.
Anyway, we waste a lot of time here in America having that argument, so I am proposing a solution. From now on, when you want to appeal to the 50's as the heighth of domestic American social achievement you should said this: "You know, life was really great in the 50's—minus all the bad stuff." If you say that then you completely cut off the counter-argument, because you can just say "Yeah racism is bad, so I'm saying we shouldn't have that."
There is just no coming back from that shut down. Think of all the time that could be saved! No longer do we have to trifle with the demagogic riposts of the intellectually lazy. The 50's can be ours again to reference ad nauseum as a paragon of societal excellence.
Draft dates 1/14/209
An inside look at Jason's playbook: i didn't mean to post this, but since i did, you can benefit.
Bone up on the Korean war. You see, no one ever talks about this war, so if you sound like you know what you're talking about people will say, "Wow, he even knows about the Korean war, obviously he is a master.
start saying "But is it really?" after everything everyone says. If not immediately obvious it will be taken as deeply philosophical, which is good.
And from today:
I am just so confused. I have to state plainly that I don't understand taste. I do not understand what leads one person to enjoy one book for certain specific reasons, and why still another will hate that same book for those reasons or maybe even others. After you've experienced enough of this you want to fold you hands, slowly get up from the table, and quietly slink out of the room. You end up feeling like the only argument you're really having is, "My taste is better than you taste." If this is true then there is no meaning, but only what meaning you assign. In this universe dialogue seems pointless
Posted by JD at 3:41 PM 4 comments: Links to this post