Creature Chronicles: The End Draws Nigh!! 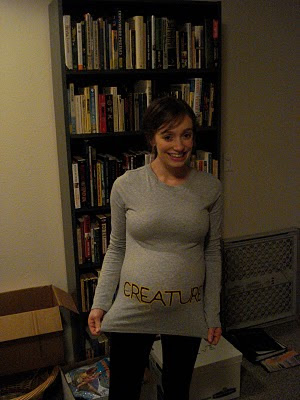 No, it hasn't quite gone the way I expected. In the perfect world, the one the good Lord intended us to have, I would have put up a blog for every single week of her pregnancy. This didn't happen, and you and I are just going to have to let bygones be bygones.
Week 21ish: 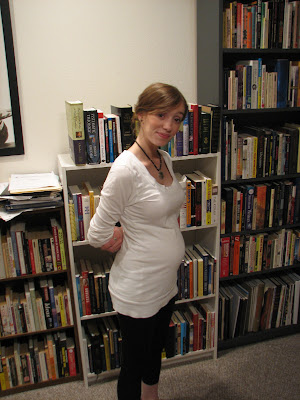 I missed the 21st week because these pictures were on a different camera that mysteriously disappeared for a few months. 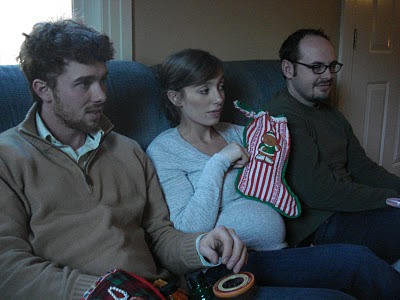 That is such a good one! Formatting issues keep me from putting these in any kind of coherent order. The pictures were added in chaotic order, and so they remain, cutting and pasting seems to be disabled in this weird parallel web-browser I'm in. 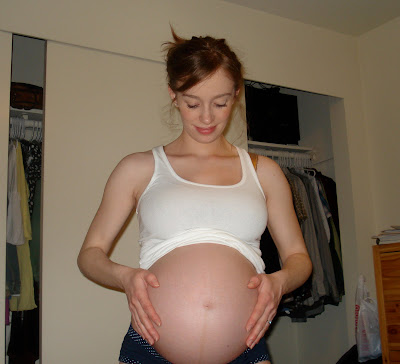 She's HUGE! And also beautiful (that's something you can't get away with saying about your wife too often: "Wow, you look huge and beautiful"). 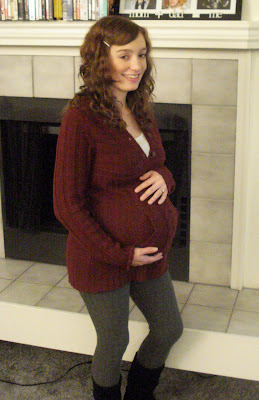 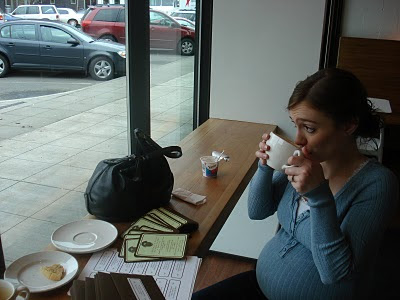 And now is when the title of this post becomes relevant: Here we stand at the beginning of week 38! I just can't take it anymore!!! (That's how badly I want little Nolan to poke his head into OUR part of the universe--I'm willing to use multiple exclamation points, something heretofore I have staunchly refused to do!!!!)

I'm being as controlled as I know how to be, but every grimace on her face means to me that her water has broken, or the REAL contractions have began. I've been wrong every time so far, but trust me that is no deterrent to believing.

Yes, I have to be controlled because if I had my way Jess would be doing the following.

1. Jumping up and down five times before passing through any doorway in our apartment.

2. Eating ginger for dinner every night (it's known for being a labor stimulant).

3. I wish I knew more things that bring on labor.

I forced our OBGYN to guess at when our son will be here, and she said that most first time pregnancies are on time to late.

I DON'T HAVE THAT KIND OF PATIENCE.

We've got our route planned, our hospital bag packed, our baby seat in the car--we just need Creature to fulfill his end of the bargain, make like a baby and HEAD ON OUT!!!!!!!!

My Brother, The Comedienne

Holy crap, this means that automatically my brother, at 16, has more guts than I've ever had. I've spent years pondering it, and he's out doing it, check it out:

A Confession of Sin

If I had to be honest about it, I guess I would say that I had no choice.
My hand was forced.
It was an inevitable thing that I could generate a thousand excuses for within minutes. I just can't see how it could have gone any other way.
I tried, and I tried hard to avoid it. I elected for the lesser cost at first. Yeah, I knew it would be slower, but who cares, I can live with slower, right? But this was really slow. I mean, like, at times worse than dial-up.
And it wasn't just the dinosaur slowness. It was also that I just, that I just, that I just plain old missed It. I missed not having the ability to flip It on and be comforted, and be un-alone, and be...you guessed it, normal.
I was able to hold out for approximately 3 weeks. And tonight it just became too much. The internet was taking at least 30 seconds to load a page. And, probably the worst thing I can imagine: Lost is on right now as we speak, and I have no way to access it. Lost is on channel 4: CHANNEL FOUR! Even bums have channel 4. Even little TVs you can by for .99 cents and have a screen that's half an inch wide have channel 4.
But I don't have channel 4. I wanted to be intellecktual. I wanted to be erudite. People that I admire don't have television. John Piper, Michael Medved, Neil Postman—these men don't watch television, and they claim they're the wiser and smarter for it. And I believe them.
But I realized tonight that I just can't be one of them. I want to, I really do. But then I think about missing Lost, I think about missing Office and missing The Soup and missing Giada...and even missing SNL even though I've hated it for a decade—and I feel lonely. Don't be fooled, this is confession of weakness. I'm a lesser man for needing It, for needing television and ripping fast internet, but I can't get beyond it.
So after 17 minutes of waiting for seattletimes.com to load, something just kind of broke inside me. The next thing I knew my phone was in my hand and I was dialing my junkie.
One year at 100 channels and 16 mbps for $66/mo—I'm sorry but you'd have to be at full nutbar to pass that up.
And I'm not smart enough or strong enough or articulate enough to be that nuttish.
p.s. This is Jason's subconscious and I just want you to know that right now Jason is praying and thanking Jesus for the amazing and mind-bending deals that Comcast is able to offer and he's asking that the Lord would see His way clear to somehow allow Jason to keep cable and "ripping" fast internet after the promo is up. I think this is sick, I think this is wrong, and I know Jason didn't want me to expose him like this but I feel that I have to for his own good and the good of his family.
Posted by JD at 9:07 PM 1 comment: Links to this post