Things I'd Blog About If I Had The Time

Creature and how he's now a turnip!

Glenn Beck and how much he sucks, and how much consternation it causes me to say that. It's like, man, am I doing the wrong thing as a conservative to point out douchebags on our side? Am I falling into "their" trap and helping to divide my side when we should be uniting? But I listen to his unfunny jokes and his rabid unfairness and crazy conspiracy theory mind and say "If that's conservatism, or something conservatism should respect, then I'd like off of this bus right now and I don't care how much I had to pay up front to get on and I'm not even going to kick and cry for a refund if you're seriously not going to just give it to me."

I'd blog about how I'm going to be switching jobs and I basically have to switch out my personality as well. I've got to play straight man, which I don't do that well. I have to stop joking around and striving to entertain people and think of funny and weird things to say; instead I have to be stern and lead. That's hard.

I'd tell you about how I have weird procrastination/writer's block issues but they're really deeply seated and have stuff to do with fear of success and real sick stuff like that. Like for instance, I have to be working on this talk I'm going to give next week and yet I thought it would be a good idea to go and take a picture of Jess when she didn't realize and then show it to you: 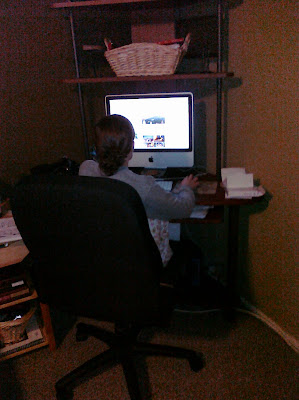 I wish I could tell you what she said right after I took this picture (I remembered to turn the camera noise of but I forgot about the flash!)—but I want to live to see my child get born so I can't tell you.
Posted by JD at 9:13 PM