Dispatches From the Edge: Fort Wars!

I can't believe it's been over two months and it has taken me till now to get to this day. When I was a kid I would whip out a fort like it was a toy pistol, but I guess in these latter years I have gotten lazy. A fort is the ultimate escape from the harsh cold and indifference of present day realities.

The idea had occurred to me about a week ago, but was not fully conceived and given birth to until today.

Today I had a fort war. 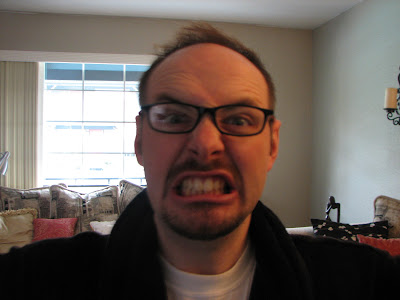 I didn't wake up this morning intending to fight a war, but I'm sure that's the same way that Dwight Eisenhower felt the morning of D-Day. Some men are born great, and some men thrust themselves awkwardly towards greatness...such were the events of the day.

I had to take this, 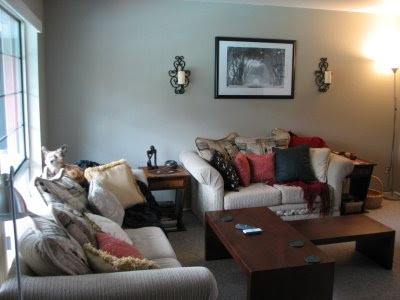 And turn it into a fully functional war machine. So the first thing I did was strip the room for parts, 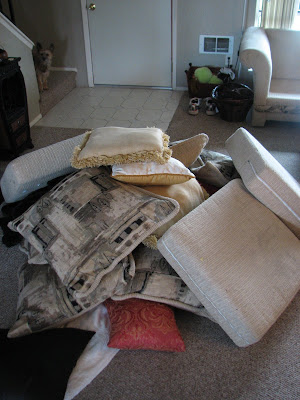 And I went to work. Six and a half hours later and I had constructed Fort Shangri La (FSL): 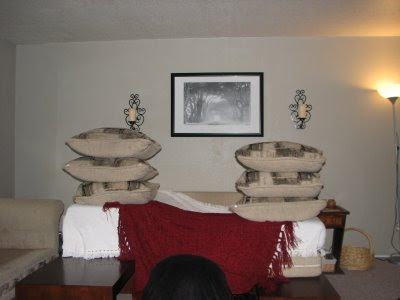 That's me climbing in for the inaugural christening for FSL. And here's a side-view of FSL, 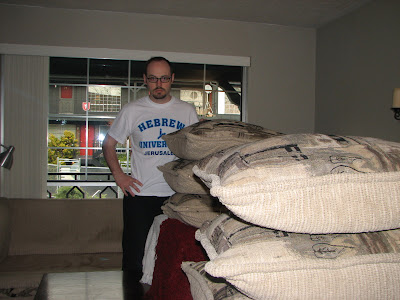 Anyway, Gretel and I were just settling in for a day of drills, reality-based war mockups and situationals, some of which are pictured here, 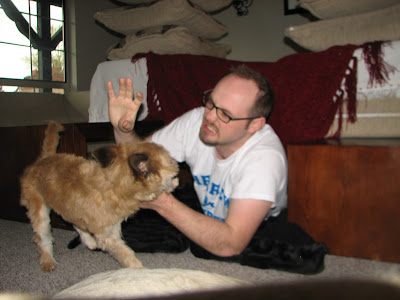 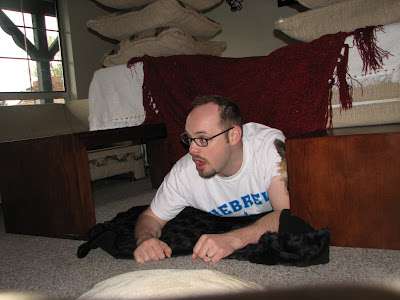 Anyway, such were our goings on when we heard the knock at the door that would forever change the soul of the Wedgewood Condo Manor.

Gretel had heard the knock first as it was her hour to stand watch, 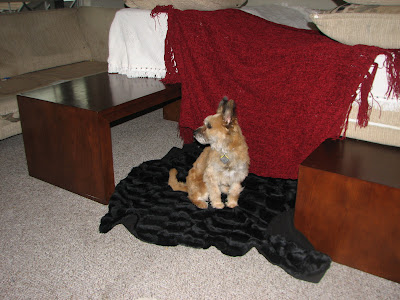 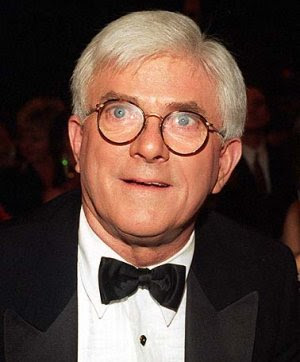 Phil Donahue is our neighbor. A lot of people think that's strange, but if you knew Phil like I knew him, then you'd think it more of an awful inconvenience. He is always poking around, asking for a cup of sugar when we know damn well he's got a whole bag, or peaking in our window to see which local news broadcast we like to watch.

Anyway, I popped out to see what he wanted, 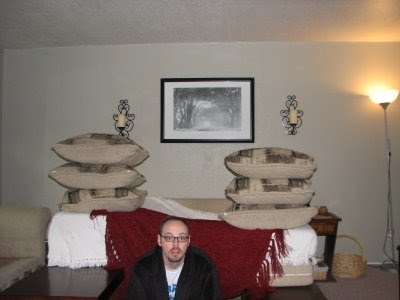 "What's up Phil—what do you want?"

"Jason, did you build a fort today?"

Uh, oh. This was a big problem. Look, there is a long back story that I really don't want to get in to, but Phil has been unemployed for a hell of a lot longer than I have. Naturally in our conversations talk about making a fort had come up. The talks have intensified ever since I lost my job, and he has always said that his one request is that when I finally decide to do it I needed to include him.

But like I said, he gets on my nerves, plus I feel like I've been neglecting Gretel lately, so I wanted me and her to get some quality time in. So no, I hadn't invited him. And of course he had been peaking through the window, so he had saw that I had completed construction on FSL.

I don't have like a full-on good memory of everything that happened after that. A concussion the size of the one that we endured will do a lot of things to your brain, and not many of those things are good.

There were a lot of threats, I remember that's how it started. Donahue became very flammable very quickly and started cursing me in Yiddish. I told him that was offensive as he is not Jewish, and that only inflamed his passion further. There were a lot of "How could you's?" and "there will be significant and commensurate payback's" and things of that nature.

I became rather scared because Phil is a very unstable guy, and I retreated to the safety and relative comfort of my fort. 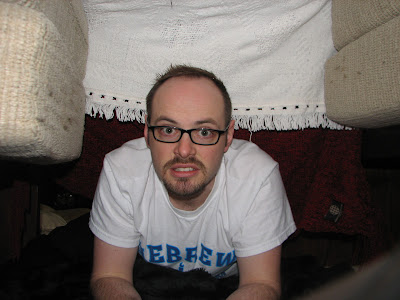 That's when the pounding started. I could hear nail after nail being driven into plywood. At certain times I could hear the definite scream of a skill saw. There was the flash of blowtorch that also echoed down our shared walkway, and I knew that it was on: he was preparing a battle-ready fort so that we could war.

Were we scared? Yes, I believe you could say that, 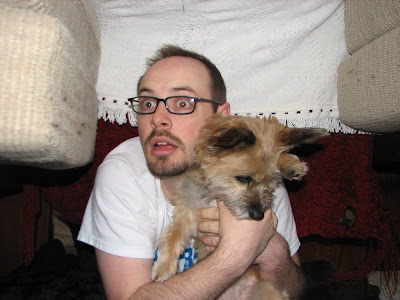 I knew that FSL would be able to withstand heavy damage, but I also knew that Donahue had access to many more funds and resources than I could ever hope for.

Gretel and I kicked strategy around for awhile. She said I could hide in the bathroom and she could pretend to sleep, but keep her eyes open just a crack, so that maybe Donahue would let down his guard, she even demonstrated: 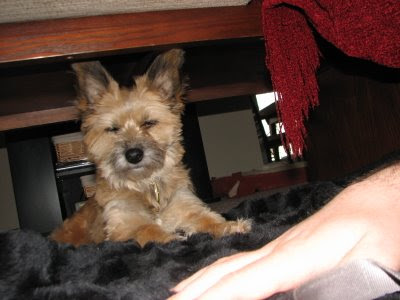 I told Gretel that I really appreciated her idea, but that we had to think a little bigger than that. As happens so many times in the heat of battle, that set off a little tiff among allies. She tried to get up in my grill and maddog me, 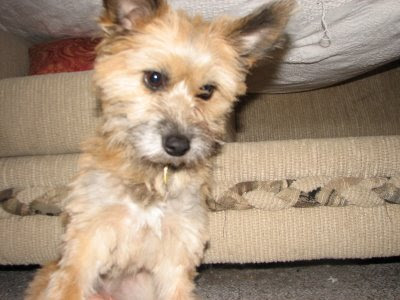 So I shoved her back in order to initiate dominance, 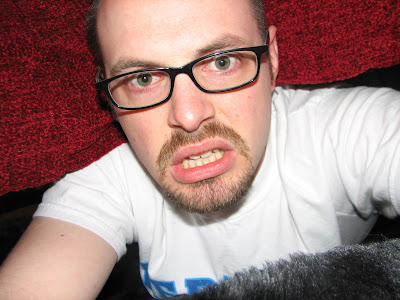 She was still bucking my authority so I went for her jugular, 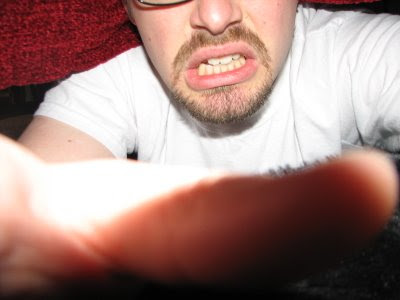 And after that she evacuated her bladder and began to whimper.

So it was good that that situation was resolved, but then Donahue began to text me.

I knew that these were run of the mill psy-ops and I tried not to let them faze me, 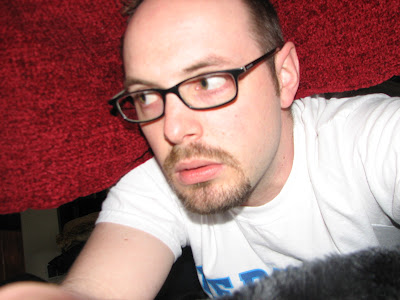 But like I said, I new that he had superior equipment to mine, and I couldn't stomach the idea of the total decimation of FSL.

Yes, I know that he had never actually tasted my wife's cooking, but I didn't really care. All I new was that Gretel and me were not happy, 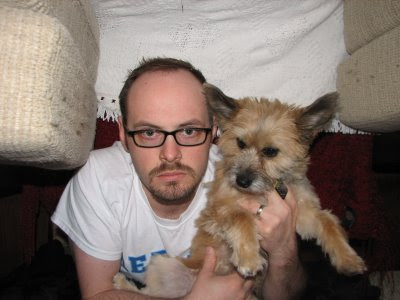 You don't go there with me—you don't even get close!—and Donahue knew that. I started to get a little shaky because I have never actually called in an airstrike, but if there was ever a time...

Could I acutally do it? Could I assert my will over my neighbor Donahue? 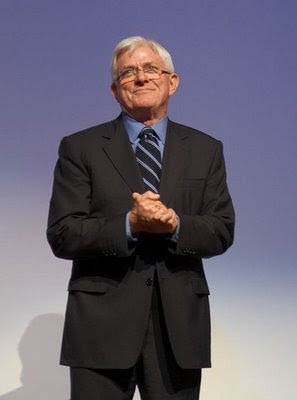 And the kicker is that in some ways he is actually a decent guy. Decisions decisions, I was at a real impasse, 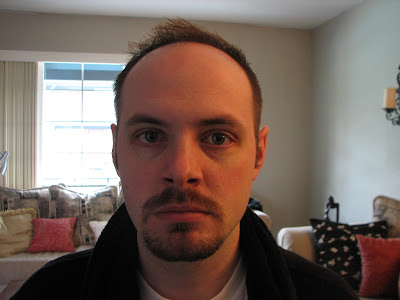 But then Gretel looked up at me, 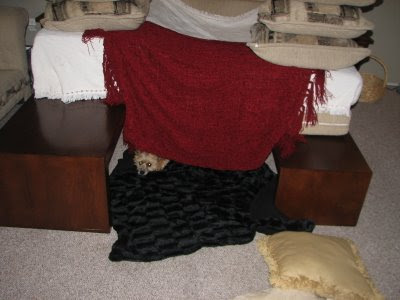 and said, "You only live once, and FSL was supposed to be forever, just go for it."

That was all I needed. 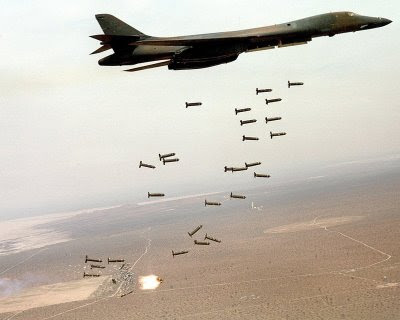 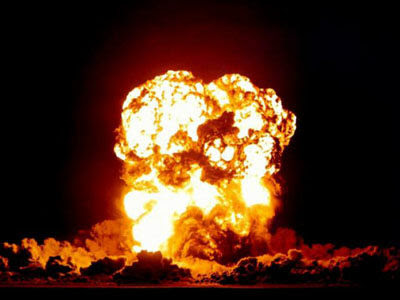 Like I said, the concussion from the blast threw me against the wall and I took a terrible bump to the head.

It turns out that Donahue is fine. It was his plan to set me off with that text, he knew it would do the trick, and after he hit the send button on his phone he closed the lid of his lead-lined 1940's style freezer that he was laying in and waited for the, as he called them, "fireworks."

The airstrike cost me about $13 million dollars, so Jess is pretty pissed at me for dropping that kind of jack while unemployed.
But Fort Shangri La still stands, so if you ask me, even with the having to sell myself into slavery as a down payment, it was worth it.
Posted by JD at 2:18 PM

that was an epic adventure, but why hadn't you invited phil over for dinner and prevented this whole mess?