This Nonsense Has To Stop

You know what, I'm calling bullcrap on this kind of stuff: 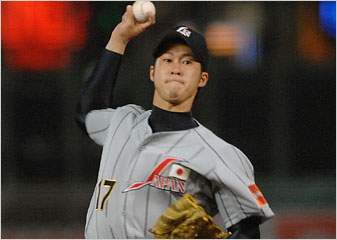 Sam Yeh/Agence France-Presse — Getty Images
Japanese Are Irked by U.S. Interest in Pitcher
Excuse me, the Japanese are irked by American interest?! I could roll out the obvious, and, actually, I think I will. Japanese, you would be nothing if it wasn't for big brother America and our hankering for kindness, restraint and nation building. Secondly, the Japanese being annoyed by Major League interest is like high school players telling big league agents to bug off—it would never happen in a million years. And I know what they're thinking. They're generally a timid people, but they wanted to get in while the gettings good because we're a little down and away, to borrow a phrase. Yep, everyone loves to pile on when the big dog is down, so Japan thought they'd get a few good kicks in when they figured no one was looking. America is in a recession, America is bogged down by two wars...Well not so fast.

I guess they weren't counting on me. Japan, I call on you to renounce your ill-selected arrogance. Is this whole thing about Ichiro? If so you can have him, he's just about dried up as it is, but we appreciated it while it lasted.

Ok. I'm sorry. I didn't really mean that last paragraph, I just let my anger get the best of me. I actually have a an Ichiro bobblehead doll, so of course I don't mean it. Just ease up, would ya, Japan?

Anyway, in the end I guess I'm willing to call the whole thing a draw in light of the fact that they did give us Domo: